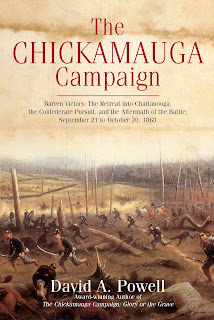 EL DORADO HILLS, CA: October 4, 2016 – Savas Beatie recently announced the release of the third and final volume in David A. Powell’s magnificent Chickamauga trilogy, The Chickamauga Campaign—Barren Victory: The Retreat into Chattanooga, the Confederate Pursuit, and the Aftermath of the Battle, September 21 to October 20, 1863, which concludes this comprehensive examination, more than a decade in the making, of one of the most important and complex military operations of the Civil War.

The first installment, A Mad Irregular Battle, introduced readers to the major characters of this sweeping drama and carried them from the Union crossing of the Tennessee River up through the bloody but inconclusive combat of the first and second days of the battle. Glory or the Grave, the trilogy’s second volume, which recently won the Atlanta Civil War Round Table’s Richard B. Harwell Award for 2016, focused on the decisive third day of fighting that included the Confederate breakthrough and the desperate Union final stand on Horseshoe Ridge.

Barren Victory, Powell’s final installment, examines the immediate aftermath of this great battle with unprecedented clarity and detail. The narrative opens at dawn on Monday, September 21, 1863, with Union commander William S. Rosecrans in Chattanooga and most of the rest of his Federal army in Rossville, Georgia. Confederate Gen. Braxton Bragg has won the signal victory of his career, but has yet to fully grasp his success. Unfortunately for the South, three grueling days of combat have broken down the Army of Tennessee and made a vigorous pursuit nearly impossible. In addition to carefully examining the decisions made by each army commander and their consequences, Powell sets forth the dreadful costs of the fighting in terms of the human suffering involved. Barren Victory concludes with the most detailed order of battle for Chickamauga ever compiled and a comprehensive bibliography. The award-winning Chickamauga Campaign trilogy is now complete.

“I will not mince words. Dave Powell’s three-volume work on the Chickamauga Campaign represents the most significant Western Campaign contribution since Albert Castel’s Decision in the West. The bibliography in Barren Victory, Volume 3 of his trilogy, reveals the breadth and scope of his research. Every story has a beginning, a middle, and an ending. In this third volume, the reader discovers how this epic story concludes. Must reading!” said Larry J. Daniel, author of Days of Glory: The Army of the Cumberland.

“With the publication of Barren Victory, the three volumes of The Chickamauga Campaign are at last complete,” said Powell. “I began this work in 1999 as research for a different project, little dreaming that someday those three volumes would sit on my shelf, complete and superbly produced. I am delighted with the end result.”

About the Author: David A. Powell is a graduate of the Virginia Military Institute (1983) with a BA in history. He has published numerous articles in various magazines, and more than fifteen historical simulations of different battles. For the past decade David’s focus has been on the epic battle of Chickamauga, and he is nationally recognized for his tours of that important battlefield. He is also the author of The Maps of Chickamauga (2009), the award-winning Failure in the Saddle (2010), and the first two volumes of the Chickamauga trilogy, A Mad Irregular Battle (2014) and Glory or the Grave (2015). David and his wife Anne live and work in the northwest suburbs of Chicago, Illinois. He is Vice President of Airsped, Inc., a specialized delivery firm.

About Savas Beatie LLC: Savas Beatie LLC is a leading military and general history publishing company. Read more about The Chickamauga Campaign—Barren Victory and all of David’s great books at http://tinyurl.com/ja5gcsp.

The Le_Meridian Funding Service went above and beyond their requirements to assist me with my loan which i used expand my pharmacy business,They were friendly, professional, and absolute gems to work with.I will recommend  anyone looking for loan to contact. Email..lfdsloans@lemeridianfds.com  Or lfdsloans@outlook.com.WhatsApp ... + 19893943740.