I had no idea where he was going with this when Savas Beatie’s managing director Theodore P. Savas first said it. I’ll admit, after a couple of hours as an exclusive observer (a 16-year-old summer intern, actually) of the Savas Beatie publishing environment, I’m still not completely sure what he meant. (Stay tuned later in the week for an explanation.) Nevertheless, I do know a lot more about what goes on in a publishing company than I did before I walked into this quaint little office in El Dorado Hills, an upscale and quiet suburb east of Sacramento, California.

This morning I was fretting about what I should wear to my first day of work. I envisioned an office with briefcase-carrying, business-suit adorned men and women typing away and answering calls in their cubicles. I didn’t think anything I owned was nearly formal enough. Nor did I imagine that I would be doing anything other than licking envelopes and filing papers.

What a surprise I was in for . . . not a cubicle in sight! I have my own work area: a big round conference table stacked with various Savas Beatie books, a green plant in the corner (there are many of these in the office; I’ll get back to you about whether or not they’re real), and a large whiteboard keeping track of future books by title, author, genre, publishing date, editor, and so forth.

I didn’t expect to see all these bookshelves and book displays. I’ll admit in the back of my mind I was hoping I’d glimpse one of those old-style printing presses in some lonely room. There are a lot of Civil War paintings adorning the not unattractive beige walls, and a “300” Spartan movie poster in Mr. Savas’ office. I guess I should have expected so much, considering it is a historical book publishing company.

Overview: So, eight to ten books each season (publishing seasons are fall and spring), a lot of marketing, and some shipping (most books ship from a central warehouse outside Washington, D.C.) Not too big of a place. . . several offices and lots of open space, with four people working today when I first came in. No one gets bored here.

Interesting books: After looking around at the bookshelves and stacks throughout the office, one book that jumped out at me was Larry Tagg’s The Unpopular Mr. Lincoln. Who knew “Honest Abe” wasn’t venerated by his contemporaries!?

It’s been a whirlwind of a month. Ted Savas and I had our trip to New York and Gettysburg as you know. Then I went on vacation just a week after getting back. I finally feel like I am getting settled back into a routine now.

We have some exciting news regarding our summer schedule. Today we welcomed Parul Guliani, a high school student who will be interning at Savas Beatie this summer. She will mainly be working under me in the marketing department this summer, but also contribute to our social networking efforts and help with various things as they come up.

One of Parul’s tasks will be maintaining the Savas Beatie Intern Journal, a behind-the-scenes look at our company from someone who is learning about it and experiencing the book publishing world for the first time.

I will post the first entry on my blog later today. We think it will be a great experience for all of us to have her here this summer.
Posted by Sarah Keeney at 3:18 PM 1 comment:

And now off to the final leg of our trip – Gettysburg! This was my first time to a national park battlefield and it was great. Ted and I arrived Sunday night and met up with J.D. Petruzzi. It was so nice to finally meet one of our authors who I have communicated with only via email and phone for the last few years. And, I couldn’t have had better guides for the trip. The three of us used The Complete Gettysburg Guide (first final copy I had seen!) and started my tour at the location where the first shot was fired. We got many important stops in that evening including the Bloody Railroad Cut, Little Round Top, and Devil’s Den, and even caught the tail end of the sunset. 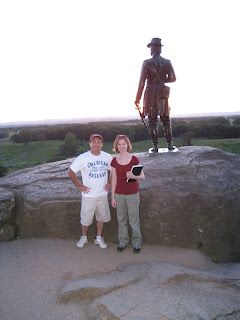 Ted and I in front of a very familiar looking image backdrop . . . =) 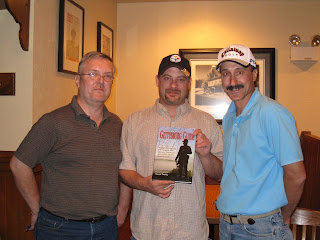 Steve Stanley, Jim Glessner, and J.D. Petruzzi at O’Rorkes Sunday evening, with one of the first copies of The Complete Gettysburg Guide signed by the authors. 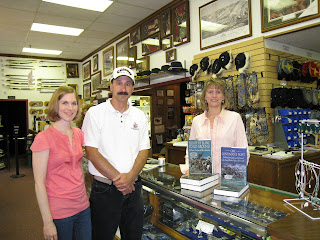 Monday Ted and J.D. and I spent the morning visiting with stores in the downtown area. It was nice to put faces with the names of people at so many of the stores we enjoy doing business with. It was also very exciting to see many of our titles while browsing through the book selections. I look at the spines of the same books on the bookshelf in my office every day, but something about seeing them beautifully displayed in the stores gave me a new appreciation for what we do. J.D. and I are here with Tammy Myers at the Gettysburg Gift Center. Tammy works with us to set up some great book signings on busy weekends, and we are looking forward to some good signings at their store July 4 weekend in particular. 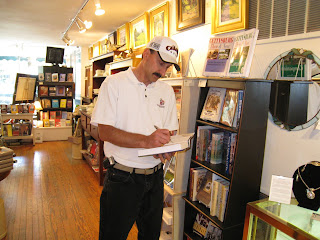 Here, J.D. is signing a copy of One Continuous Fight in Gallery 30. Gallery 30 is a very well laid out store with lots of beautiful artwork and gifts. The first thing I noticed when we walked in the door were copies of The Unpopular Mr. Lincoln and The New Civil War Handbook right in the middle of their front table! 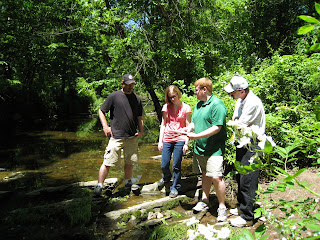 Monday afternoon we got a tour of Willoughby Run by Eric Lindblade, Sickles enthusiast, American History store employee, and our guide for the afternoon. He kindly put up with my naivety and even Ted got to see a section of the field he hadn’t visited before. 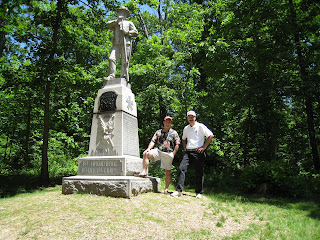 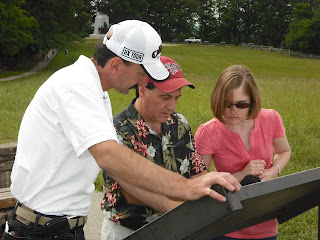 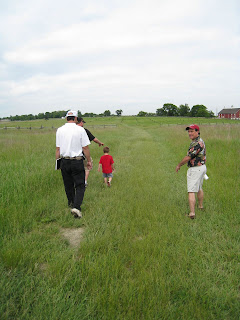 And then off to Pickett’s Charge, or should I say the Pickett-Pettigrew-Trimble Charge? (See guys, I’m learning!) We walked Pickett’s charge with Jim Glessner, who does a great job with the book section at the American History Store, and his son Jacob, who provided some good laughs and even showed off some impressive field knowledge for a five year old! 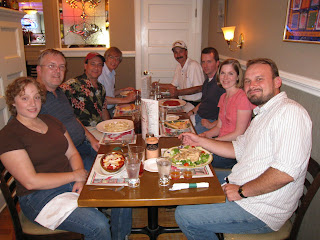 Monday evening we had our Savas Beatie author dinner including Kyrstie, Steve Stanley, Ted Savas, George Newton, J.D. Petruzzi, Jim Hessler, me, and John Hoptak. It was nice to meet the Savas Beatie Gettysburg authors, and two before their books even come out! 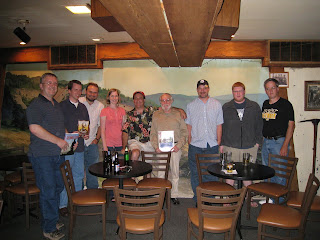 After dinner we headed to the Reliance Mine Saloon for our final beers of the trip. And I got to see firsthand where the infamous photo of DT, Ted’s son, holding an (empty?) glass bottle was taken. Steve Stanley, Jim Hessler, John Hoptak, me, Ted Savas, William Frassanito (whose books were fantastic for this battlefield-newbie), Jim Glessner, Eric Lindblade, and Duane Siskey. 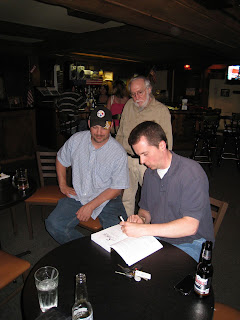 Jim Hessler signing an advanced copy of Sickles at Gettysburg for Jim Glessner. Good practice for the book’s debut at the Butternut and Blue Booth at the Civil War Collector’s Show on June 27!

Thank you to everyone in Gettysburg and especially J.D. (who made the long trip an additional time, for my visit) for making it such an enjoyable and memorable trip. I truly appreciate it. 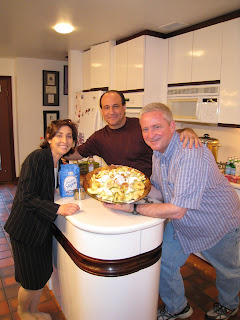 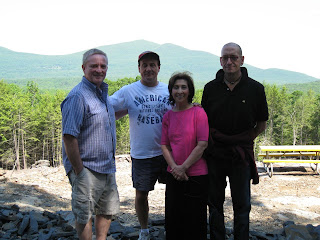 Bob Ney, Ted Savas, Ellen Ratner, and Richard Miller at "the most beautiful spot in New York." Hard to top that view. 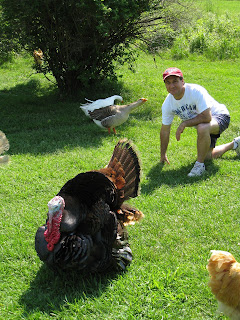 Ted on the Ratner farm with Pavo the turkey.

Ted and I left Book Expo America early for a trip to the Catskills area of New York. We were guests at Ellen Ratner’s house for the weekend, along with soon-to-be Savas Beatie author Richard Miller and Bob Ney, political analyst for Talk Radio News Service.

Saturday night we all made a delicious dinner together, including steak, fish, grilled corn and asparagus, salad, and a Savas Beatie Apple Pie for dessert! (Are you hungry yet?) Sunday morning we had a marketing meeting to strategize for the 2010 release of Fighting Words by Richard Miller. We followed this with a beautiful walk AND an ATV ride around the property, a trip to visit the Ratner farm (bunnies, turkeys, goats, and all!), and more good food.

It was a great mix of business and pleasure, and a weekend to remember. 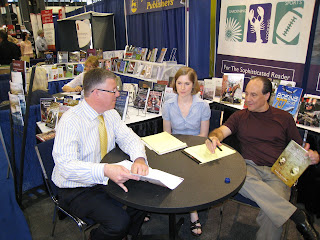 A meeting at the Casemate booth with David Farnsworth. 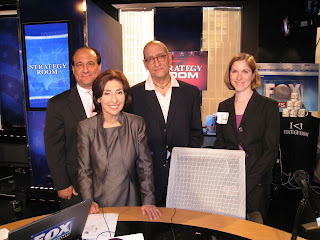 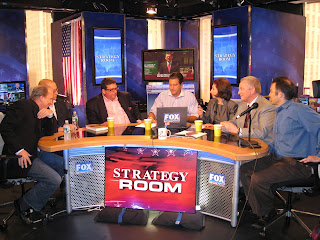 Filming of The Strategy Room on Fox News, the Friday, May 29 show. 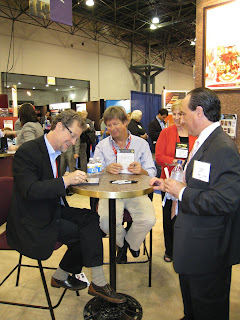 Ted getting a copy of the new Steve Barry and Ridley Pearson audio book signed for his son DT.

Well, we are back from our six day whirlwind trip. Part One took us to the Javits Center in New York City for Book Expo America. We were only there for about half of the show instead of our usual three days, but we crammed a lot into that day and a half.

The set up at our distributor Casemate’s booth was great. They displayed books and had posters set up in a new format which made the booth and whole area much more open and inviting for meetings and attendees walking past. People walking by would slow down because the large posters had caught their eye. Ted and I had some productive meetings with representatives from Penguin and Barnes and Noble, Oasis Audio regarding audio rights for a number of our titles, Brian Jud’s book specialty sales team, and the Military and History Book Club editor. (More on some interesting info from those meetings in later posts.)

Friday afternoon we were in for a treat. We are publishing a book by Richard Miller in Spring 2010, a follow up to his most recent book In Words and Deeds: Battle Speeches in History. Richard and his cousin Ellen Ratner (White House Correspondent and news analyst) were slated to be on Fox News Channel’s Strategy Room that afternoon. We headed over to the studio, saw Geraldo Rivera in the staging room, and watched a taping of the show. My mom even saw me on camera. =)

Friday evening we had a nice dinner with the Casemate and UK crowd at an Irish pub. Saturday morning and early afternoon we finished up at the show. There was lots of talk and articles written pre-show about a toned-down version of BEA this year, after such low attendance in Los Angeles last year and with the present state of the economy. Although a lot of European companies didn’t send representatives and some big author names were missing from the line up, Savas Beatie had a very successful show - it was another great BEA! Part Two . . . to the Catskills.

Posted by Sarah Keeney at 7:38 PM No comments: